I often think of my paintings as parts of a narrative story. They are, in a sense, flashes from another reality, which is fictional, but contains references to my own world of experience. Painting to me means visualising my thoughts. I usually start off with a drawing. During this time my thoughts begin to take form, growing and developing in the course of the process. At its best the process resembles an adventure.

My motifs are born of fantasy and intuition. The works emerge gradually as I live with them. To me it is important to enter into the world of the subject. I often depict people who live within their own restricted world. For them, however, it is their truest world. The persons in my paintings are not self-portraits, but on an emotional scale they have many common traits with me.

I often find myself treating fundamental human questions. In my paintings both conflict and peace are present simultaneously. The figures depicted are lonely, but in some sense, also, well-balanced and even happy.

A painting is an entity, where the original motif constitutes one part, but in which other equally important parts are created through the tensions of colour and surface. To me, finally, paintings are mysteries, which are difficult to explain and fathom.
Show biography 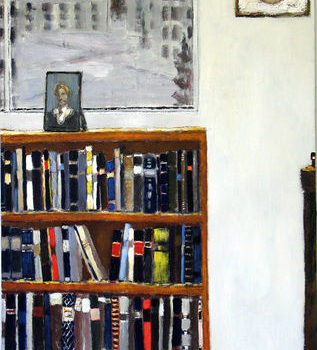 Viggo Wallensköld (born 1969, Porvoo, Finland) is an artist based in Helsinki and Tampere. He earned a Master´s degree in art from the Finnish Academy of Fine Arts, and has also studied art education in the University of Art and Design Helsinki, and Art history in the University of Helsinki. The main themes in Viggo Wallensköld´s paintings have been contradistinctive references concerning corporeality and identity. The paintings can be strongly experienced, and their effect on the viewer is open to a multitude of interpretations. Viggo Wallensköld has held private exhibitions in Finland and outside Finland, for instance at the Tampere Art Museum and at the Amos Anderson Art Museum in Finland 2005 and at the Ludwig Museum in the Russian Museum in St. Petersburg, Russia 2008-2009. His works are represented in several major collections in Finland and abroad. Viggo Wallensköld was awarded the title of Young Artist of the Year 2005 in Finland.