Petri Hytönen: ON EARTH, AS IT IS IN HEAVEN AND SOMETHING IN BETWEEN

Valmistumisvuosi: 2017
Tekniikka: paperileikkaukset, vesiväri, magneetit, rautalanka, valot
Koko: 300 m2
Avainsanat: vesiväri, kollaasi, sekatekniikka, pigmenttivedos, valokuva, installaatio, taiteilijaryhmä Ilomiehet, yhteistyö, julkinen taide, tilaustyöt
In the exhibition “On earth, as it is in heaven and something in between” Petri Hytönen looks at the never-ending conflict between the spiritual and the carnal. The exhibition has been inspired by church painting, in which illustrated narratives are played out amid architecture. Hytönen uses hundreds of hand-painted, cut-out watercolour-paper dolls hanging in space to create a collage of scenes from the saga of humanity that illuminate difficult, always topical, existential questions. He has painted angels, demons, heavens and hells, and standing somewhere in between them is the human being, a perplexed figure with many faces.

In his artistic work Petri Hytönen has often depicted people swimming, on swings or flying. His “floating” people are bound neither by nature’s laws nor legal norms; they become more or less an incarnation of free human beings and their innermost dreams and fantasies.

The text continues on the english side...
Taiteilijan sivulle 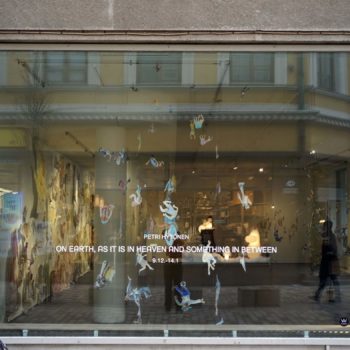 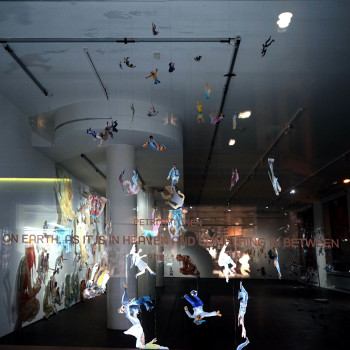 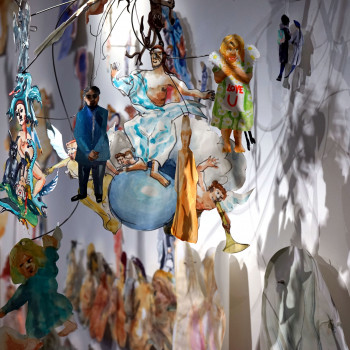 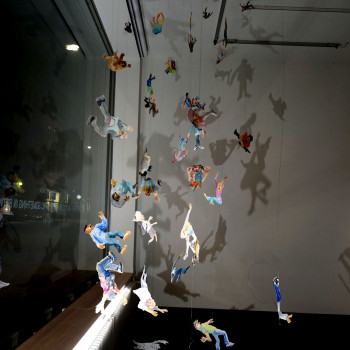 PETRI HYTÖNEN : exhibition : “Something about us…” work: “The Girl in the Skies”

ON EARTH, AS IT IS IN HEAVEN AND SOMETHING IN BETWEEN